While indexing for the Digital Archives this interesting find surfaced.  It appears that in 1852 the Grand Lodge of Illinois sent a Traveling Lodge by the name of Pilgrim Lodge to Oregon on the Oregon Trail.  It appears that because of the death of the WM along the way the dispensation never reached the Oregon Territory.  It would have been very interesting to see how the new Grand Lodge of Oregon (Oregon Territory) would have handled this.

“He [GM Illinois Ames] followed the precedent established by Brother Lavely and issued a dispensation for a traveling lodge, appropriately named Pilgrim Lodge to go across the plains of Oregon.  The Master however became ill and the dispensation was never used and it was returned from Iowa.” 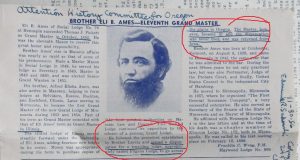 A very interesting item surfaced this morning during indexing.  A handwritten certificate of standing from Lafayette No. 3 1854.  Very early correspondence for this young jurisdiction. 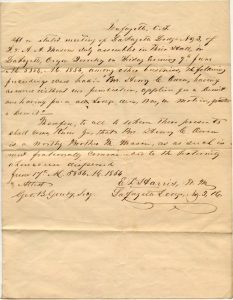